We had a chance to hear from four members of the Anne Arundel County delegation to the General Assembly at our virtual Legislative Breakfast on January 6th.  This included Senators Elfreth and Reilly along with Delegates Rogers and Kipke.  We maintained a balance of Republicans and Democrats.  A topic of great interest for the legislators and for the voters are the new maps for Congress and the new maps for the 188 members of the General Assembly.  We have heard a lot about gerrymandering and the battle between Republicans and Democrats about drawing the new lines for their own political benefit. The current system heavily favors the political party with the majority in the General Assembly, which is the Democrats.

Well, as you can guess the Republicans are not too happy with the maps. In fact, the Governor vetoed them and then the General Assembly overrode his veto.  So as they say, “We will see you in Court”. Here is a summary of where the new maps stand right now before the judicial system get a chance to review them. 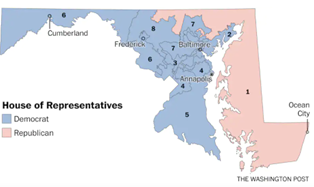 The new map for the U. S. House of Representatives will position Democrats to keep seats in seven of the state’s eight districts and raise their chances of winning in the one district they don’t currently have: District 1, which is currently represented by Rep. Andy Harris, a Republican.  The new map adds part of Anne Arundel County to District 1 with most of the District covering the entire Eastern Shore, as well as stretching into Harford, Baltimore and Carroll Counties.

Currently, Anne Arundel County is represented by four different Congressman: Dutch Ruppersberger-District 2, John Sarbanes-District 3,  Anthony Brown-District 4, and Steny Hoyer-District 5.  It should be noted they are all Democrats.  The new map moves District 3 and 5 out of Anne Arundel County but keep Districts 2 and 4 along with new a new section of District 1.  So the County will go from four Congressional representatives, to just three.  Many people feel that the County would be better served with just one representative to Congress.

What do you think?

Some folks say having the General Assembly draw their own district lines is a lot like having the fox watch the hen house. It is clearly a contentious process with the Democratic majority holding the pen and Governor Hogan and Republican lawmakers complaining of unfairness and partisan gerrymandering. But if the shoe was on the other foot, what would the maps look like?

Other than politics, population is the most important factor in the redistricting process. Baltimore City’s population fell by about 6% over the last 10 years so they will lose two seats in the House and the fast-growing parts of the state, especially the outer suburbs of Washington, D.C., will gain two seats.

Keep Your Eye on the Budget

The COVID-19 pandemic had a very unexpected impact on the State’s budget as we moved from a structural deficit to a structural surplus.  How the heck did that happen you might ask? It seems there were increased tax revenues from high income earners, increased on-line sales and the influx of federal stimulus money.  A surplus can be a scary thing since elected officials are tempted to spend the money on projects that make more political sense then economic sense.  The four speakers discussed the fiscal condition of the economy and highlighted reasons as to why the state has moved from a structural deficit to a structural surplus. It was noted that some of the Federal Funds may only cover the short-term cost for new programs and the State needs to be cautious about making these expenditures permanent.  There did seem to be agreement that there was a need to invest more money into activities that support mental health activities since the pandemic placed such a great strain on our children, educators and health care workers.

Marijuana will certainly be on the agenda again in the State House after lawmakers have inched toward legalizing recreational use over the last several years. This was discussed at the Legislative Breakfast and there is a feeling that it will be put on the ballot as a referendum item for the fall elections. There seems to be some disagreement about putting a specific proposal on the ballot or just asking the voters to allow the General Assembly to figure it out.   The Chamber has a concern about the impact on the work place and any additional restrictions or requirements it could place on employers concerning workers compensation and employment status.

It’s a Crowded Field for Governor in 2022

The Maryland gubernatorial election will take place on November 8, 2022. First, both parties will hold primaries on June 28th to determine the candidates that will run to succeed our incumbent Governor Republican Larry Hogan, who is term-limited and cannot seek re-election to a third consecutive term.

Many political analysts believe that Maryland is the best opportunity for Democrats to flip a governorship anywhere in the country next year. But first, each party has to navigate a crowded, diverse and potentially expensive primary to find their nominee. Right now there are two leading candidates for the GOP nomination: former Commerce Secretary Kelly Schulz and Delegate Dan Cox who has received Trump’s endorsement.  Former Lt. Governor Michael Steele was considering a bid but decided to remain a political analyst on MSNBC.

In the era of the post Trump Presidency, this race will get a lot of national attention given the results of the close race for Governor in Virginia and New Jersey. Since Maryland is a very blue state but has elected Republican Governors from time to time, many national political analysts think that the results of this election will be a good indicator for the 2024 election cycle.

Who will best represent your interests and the interests of the business community?