On the local level,  Gavin Buckley is getting settled into his second term after a significant election victory where he got 73% of the vote. There was slight change on City Council as Fred Paone, the lone Republican, did not run for re-election and Alderman from Ward 2 and Karma O’Neil, a Democrat, was elected.  This means there are no longer any Republicans on City Council.  There was some reshuffling of committee chairmanships, most notably the Finance Committee, where long time chair Ross Arnett from Ward 8 was replaced by Elly Tierney, from Ward 1.  Arnett has been very critical of the City’s budget.  In fact, he did not support the last four budgets. The Finance Committee usually gets a lot of scrutiny since it has to deal with City finances.

The biggest challenge facing the city in 2022, besides the impact of COVID-19, can be summarized in three words: parking, parking and parking. 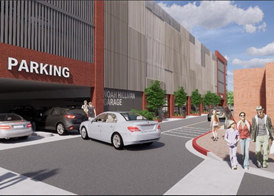 With the replacement of Hillman Garage slated to get under way in February or March, approximately 400 parking spaces will not be available; putting additional burden on downtown businesses who count on parking for their employees and customers. In addition, the construction activity will be very disruptive.  Plans have been developed through a program that will be called Access Annapolis that will focus on mobility throughout the City using a variety of alternatives for parking and getting around.  Make no mistake, this is going to be very challenging time for the downtown and I am sure the City Council and Mayor will have to field a lot of complaints, BUT the replacement of Hillman is vital to the economic vitality of the City.  It is also the first step in the re-vitalization of City Dock.  It has been estimated that the replacement project will take anywhere between 14 to 18 months. YIKES!  Stay tuned for more updates.

Another major challenge facing the City at this time is filling the position of Planning and Zoning Director. The Director has a leading role in the establishment of regulations and policies for current and future land use as well as the day-to-day operations of the Department.  As the City conducts a national search for this key position, the third highest paid employee in the City (between $104,000 and $176,000), someone very familiar with Annapolis, Mike Mallinoff, will serve as Acting Director. Mike worked for the City in various roles under three different Mayors.

The Chamber believes that a balanced approach to land use is vitally important to maintaining the quality of life in Annapolis and providing economic opportunities for the residents. The next Director needs to understand this balanced approach while ensuring the need for a timely and predictable approval, inspection, and licensing process.